We had quite a large turnout as twelve members made the trip to Marietta.  Four had already made arrangements to go together so they left early.  One combined it with a trip to the in-laws, and the rest of us met at the church for an 0830 departure.

About an hour and 45 mins later we arrived at our destination: the Cobb County Civic Center in Marietta.  We quickly unloaded and headed inside to register. 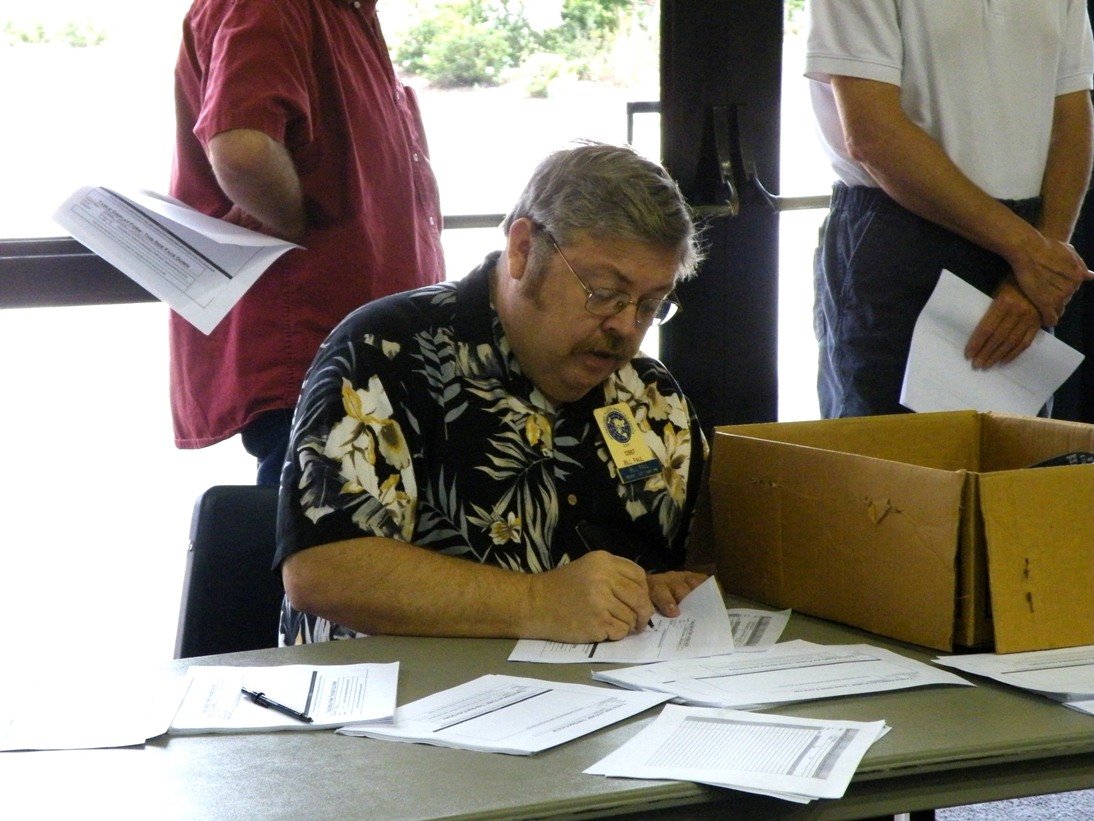 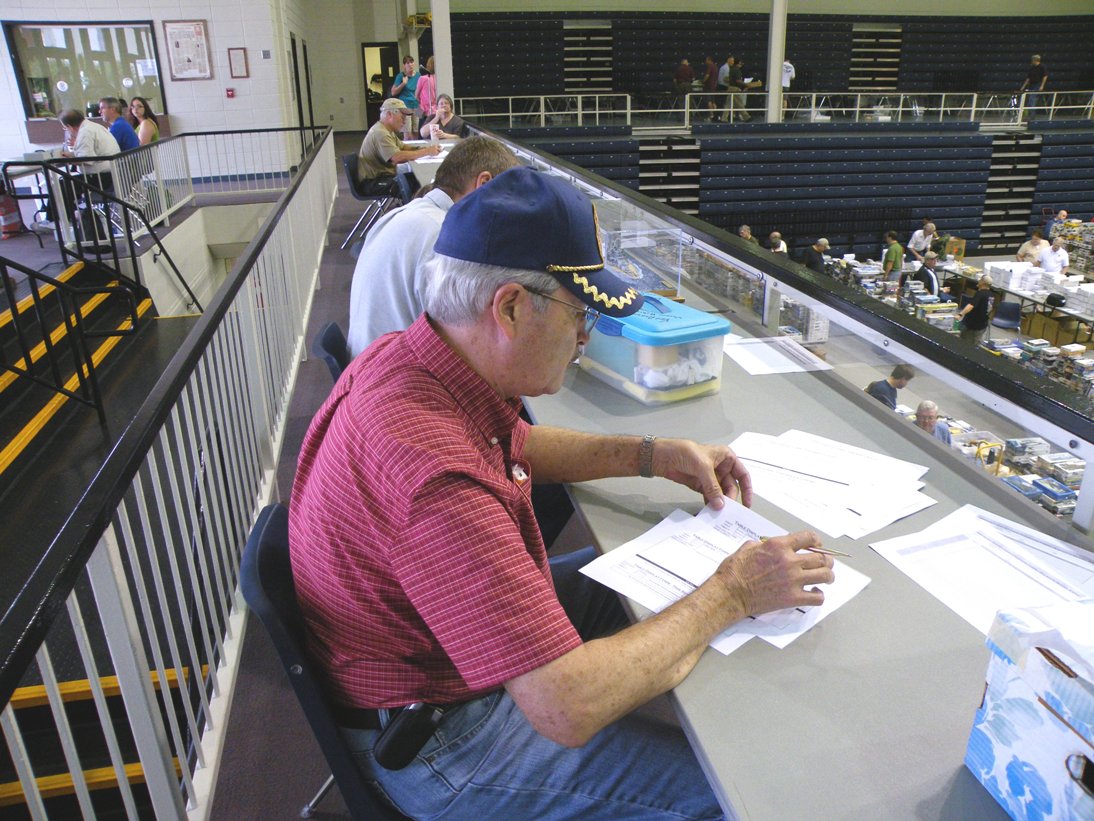 Registration was a little slow because the line was long.  There were several causes for this (contestant with large # of entries, limited # of people working registration and running out of change) which all just happened to occur simultaneously and just multiplied the delay effect.  Still wasn't too bad though. 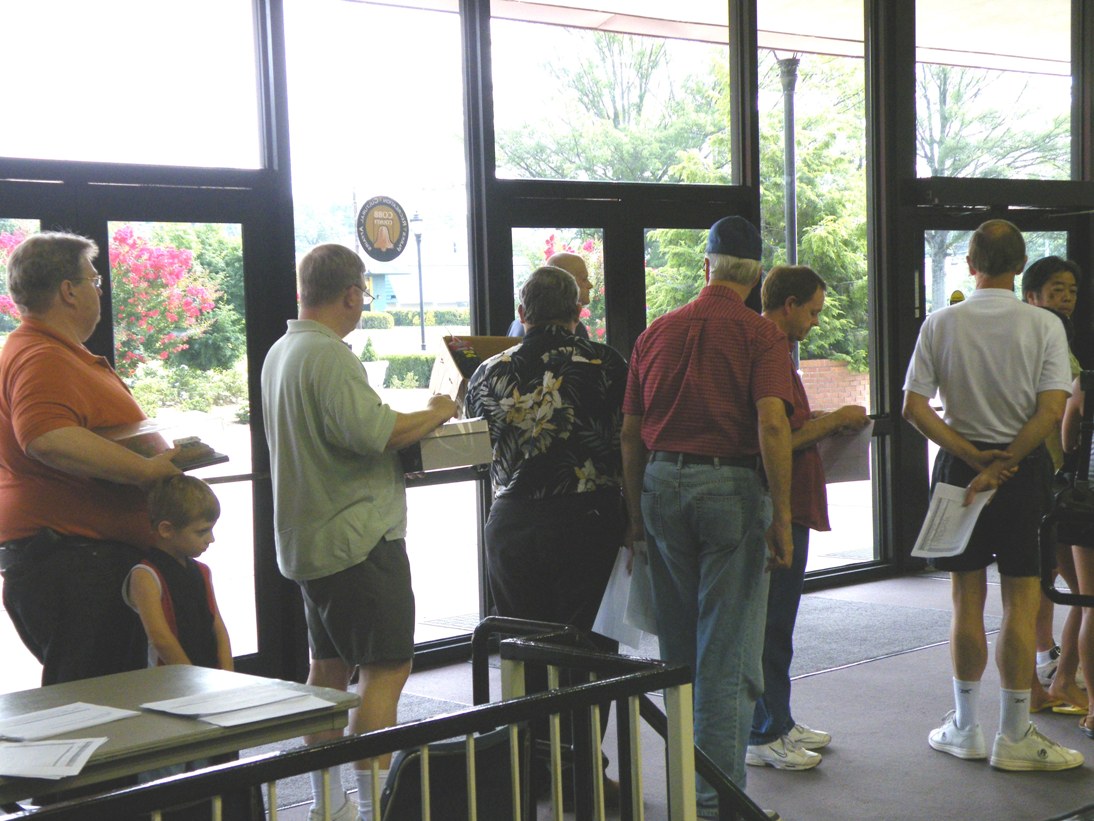 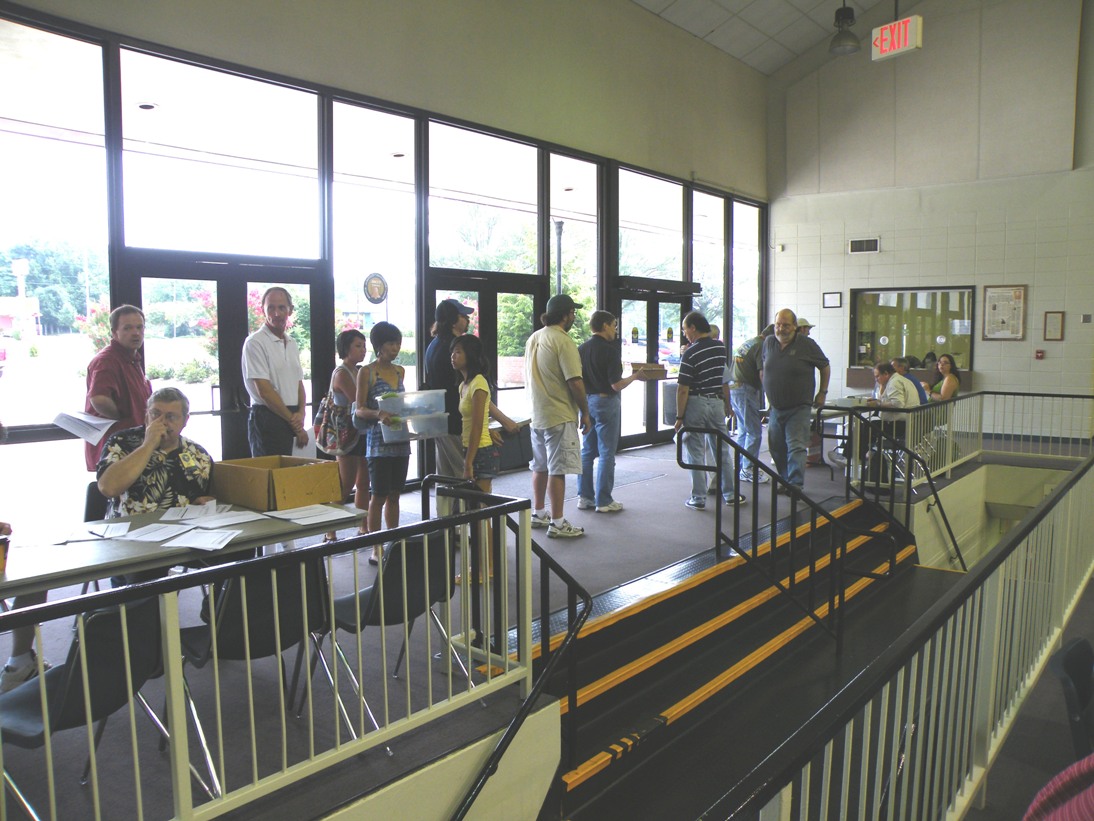 If you've never been to the Civic Center, the layout is very well suited to a model competion.  There is a upper level where all the competition tables were laid out and a lower level where all the vendors and raffle table were located.  And there were vendors: lots of them.  Prices were very good and people were willing to negotiate...some even had signs up saying so.  They seemed to be doing well, too. When asked they said they were happy. There were only half a dozen "Professional" vendors; the rest were there to thin out their collections.  In short, anyone wanting to buy had the opportunity to do so. 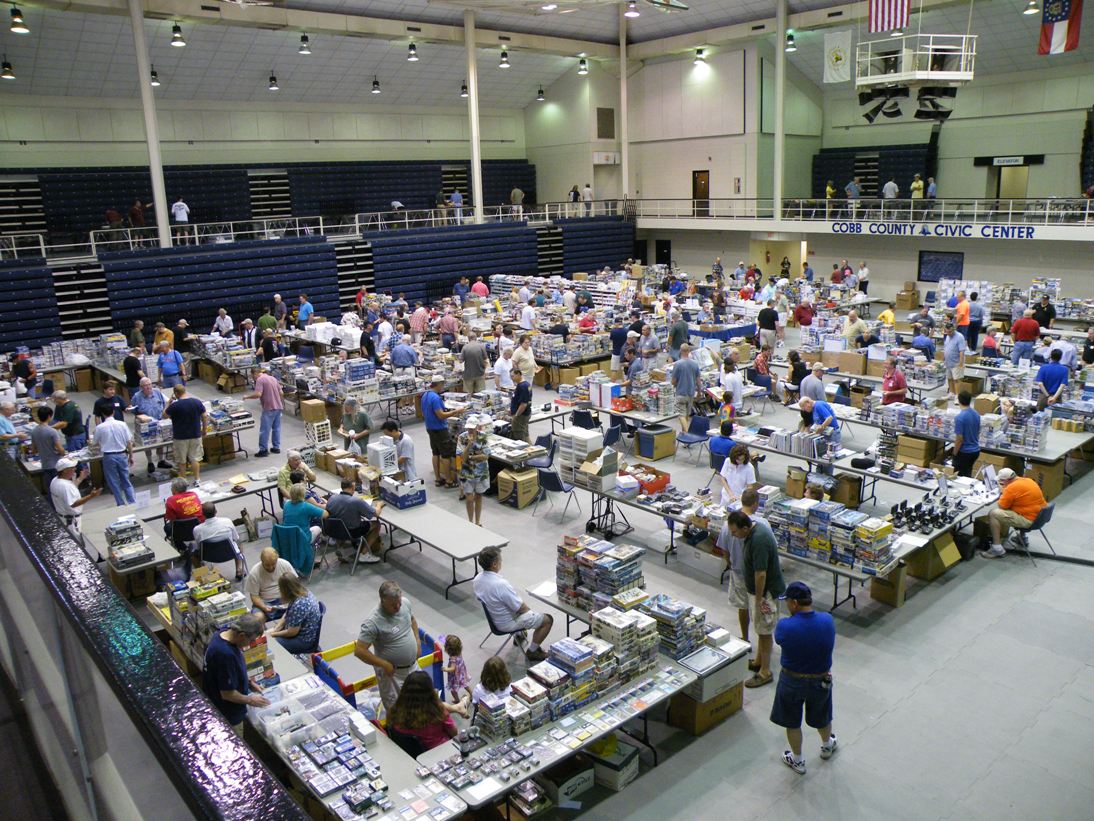 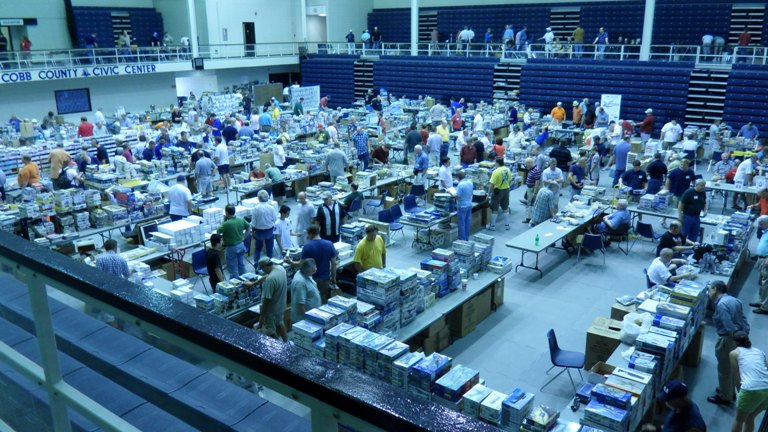 For the RL Scott entries in the contest, Jay Barfoot brought his P-40. 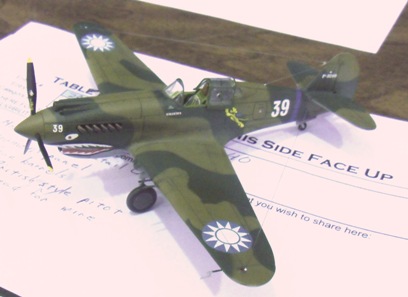 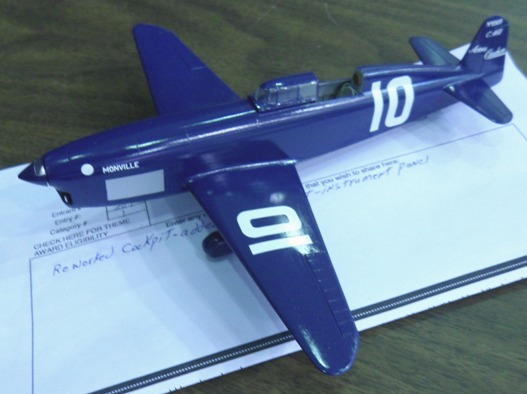 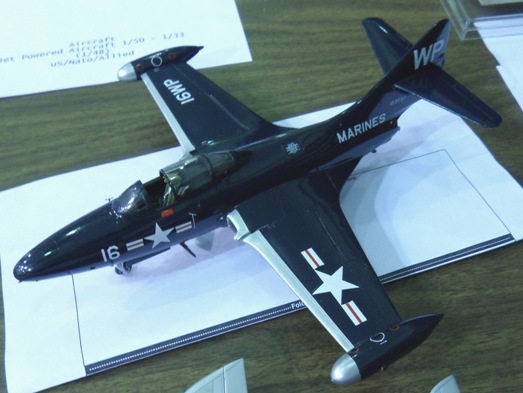 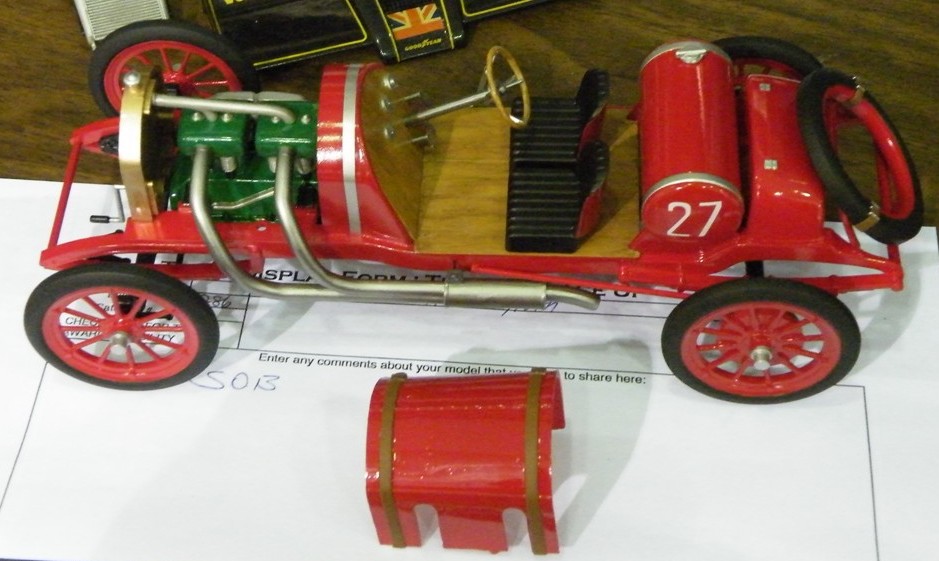 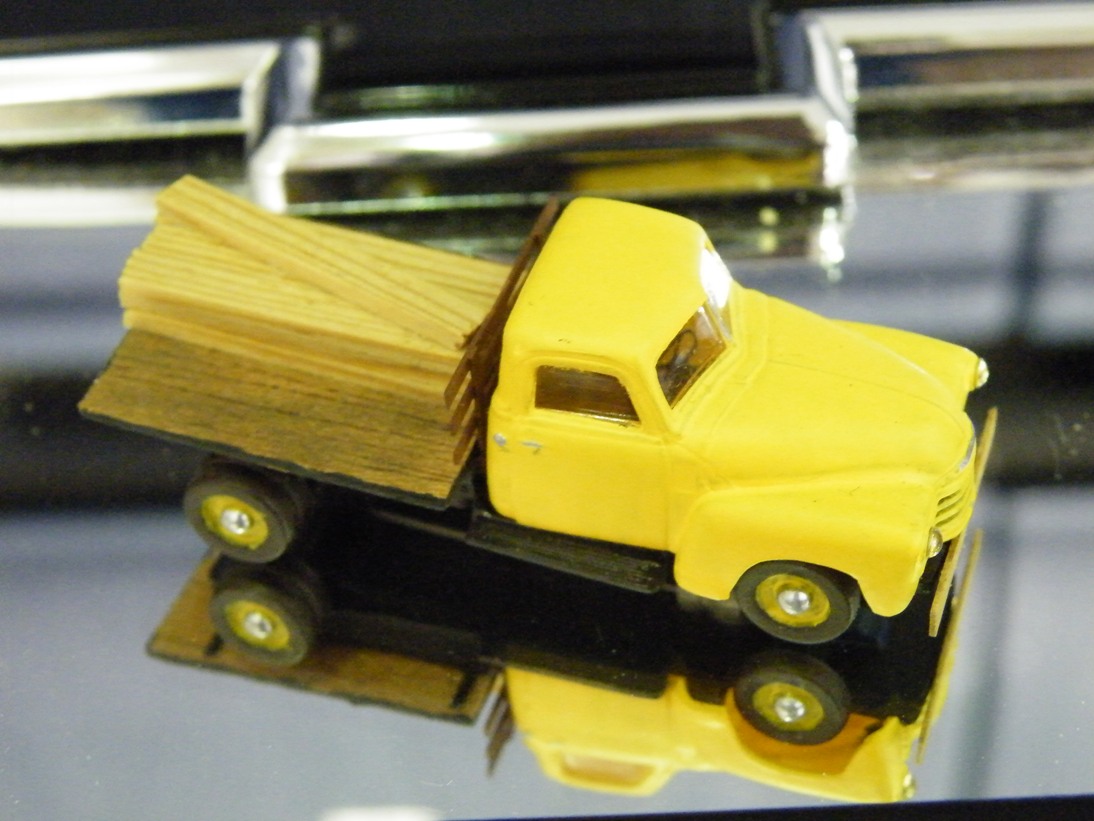 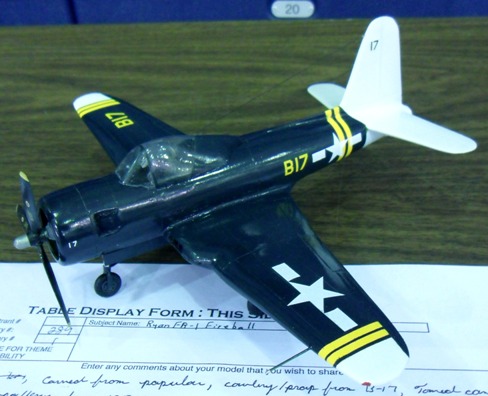 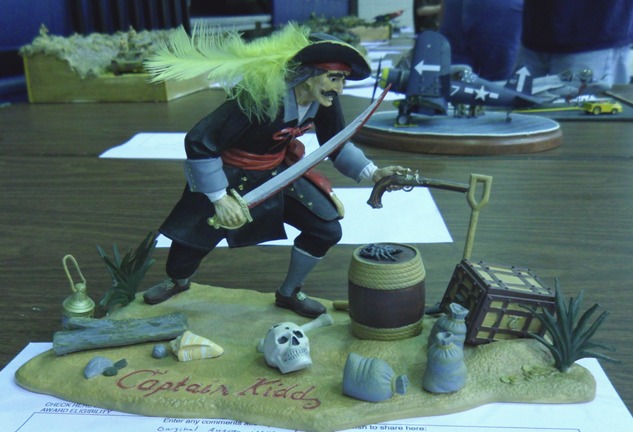 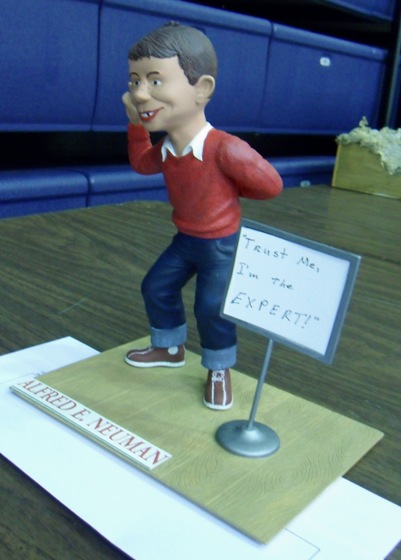 I didn't hear a final talley for the number of models but I did confirm with the show organizers that it was down from last year.  That's a trend that was reflected at Anniston and Jacksonville, too.  It didn't affect the quality of the entries, though.  They were still quite good as seen by these pics. 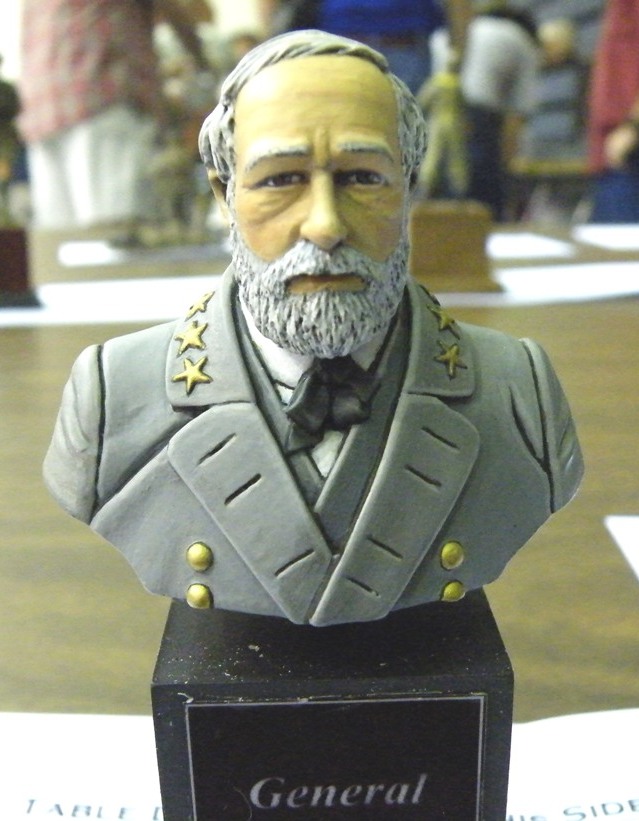 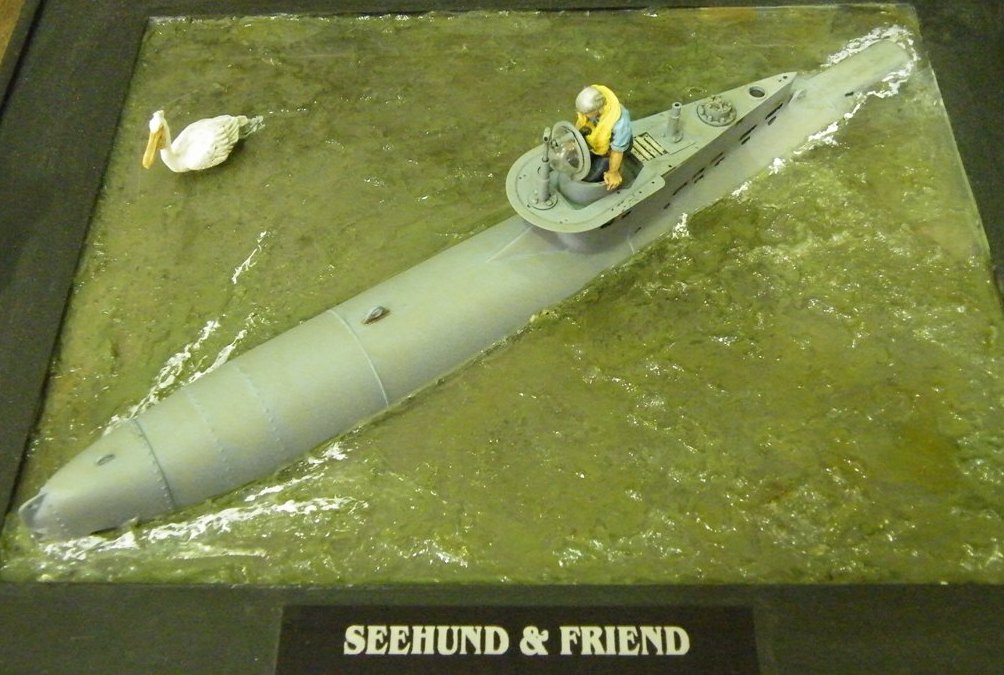 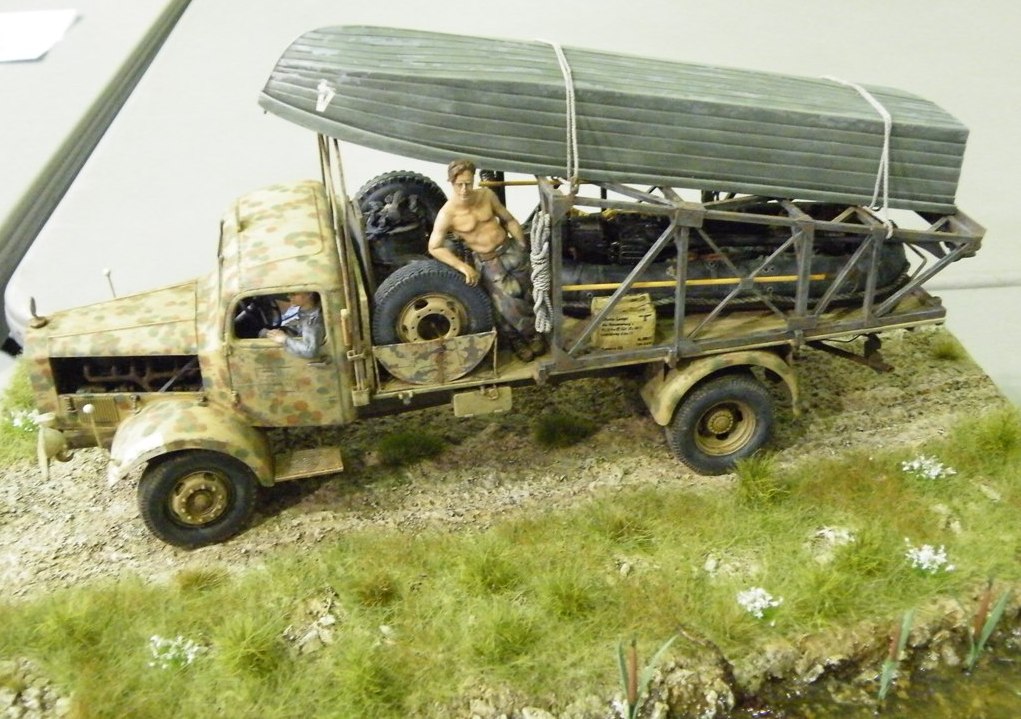 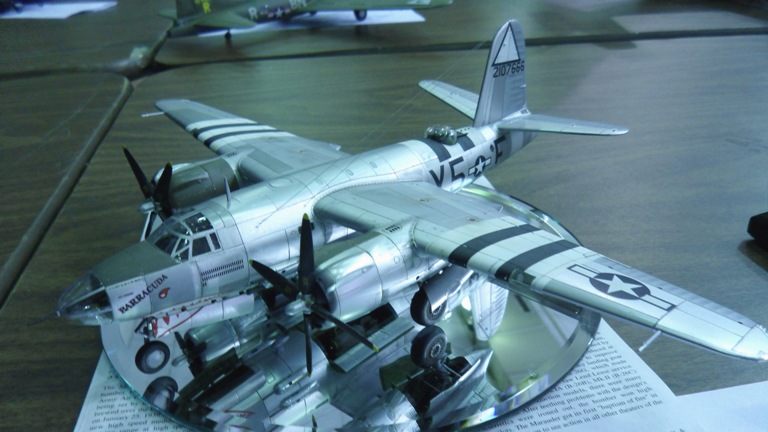 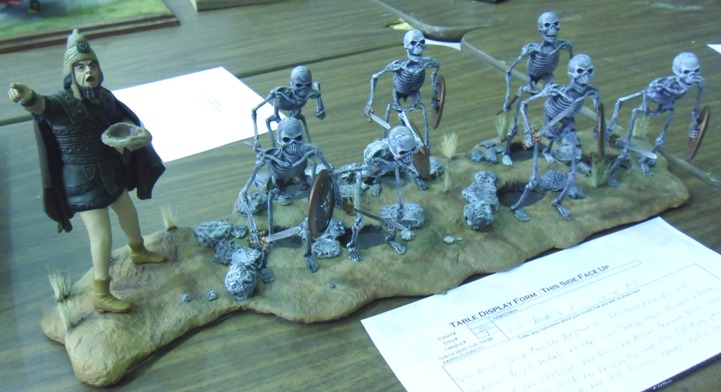 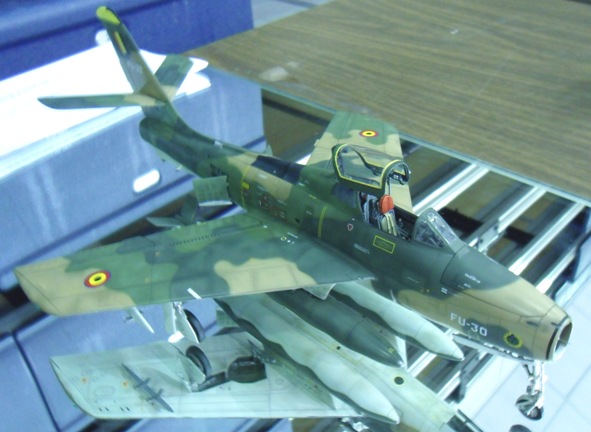 The judging was by the Gold/Silver/Bronze method most commonly referred to as GSB.  This is a relatively new style of judging that judges a model on it's own merits against a set of standard criteria: not against other models.  The number of points it scores against the criteria determines whether it receives a Gold, Silver or a Bronze medal.  To say this style of judging is controversial is an understatement.  Regional coordinators have been fired for their views on this.  In any case, Bill Paul volunteered to help judge to see what it was all about. 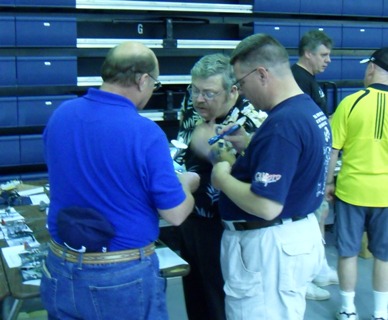 The supposed benefits of this style of judging would be a recognition of a wider number of participants for their modeling skills (theoretically all entries in a class could receive gold if they meet the criteria) and the judging would go faster.  I didn't see either of those benefits at the show.  Judging ran as long, or longer, than last year even though there were fewer entries.  Could’ve been because they were learning GSB.  But, I saw the “pen light police” hard at work looking in wheel wells and cockpits.  If they have to do that, by their criteria it should be gold already.

The “wider recognition” result didn’t occur either.  There were some deserving models that had won awards in other contests that didn’t even get a bronze in Atlanta.  This was especially evident in the Automotive class where Jerry Hall observed one of the entrants get really angry about it.  He also overheard some other contestants stating some "not very complimentary" comments about the GSB.  On the other hand, after the show at AAA Hobbies, the locals were very upbeat and positive about the outcome of the GSB judging.

So, is GSB a fad?  Don't think so.  Will other clubs adopt it?  Maybe, but others definitely won't.  Is it here to stay?  Probably, unless attendance drops severely at contests utilizing GSB.  And I really don't see that happening.  Bottom line, it's another judging method option to the traditional 1st, 2nd, 3rd method.  Each club will have to determine which method suits them best.

Getting back to the show, there were several tables dedicated to non-competition displays as well.

There was also a display for some paper card models.  They looked better than I thought they would.  In fact, I believe it's peaked Jerry Hall's interest enough that he's going to build one for our contest.  Gonna try for that E- Card Models award, huh Jerry. 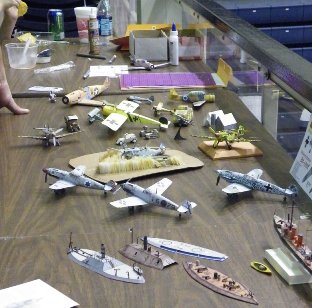 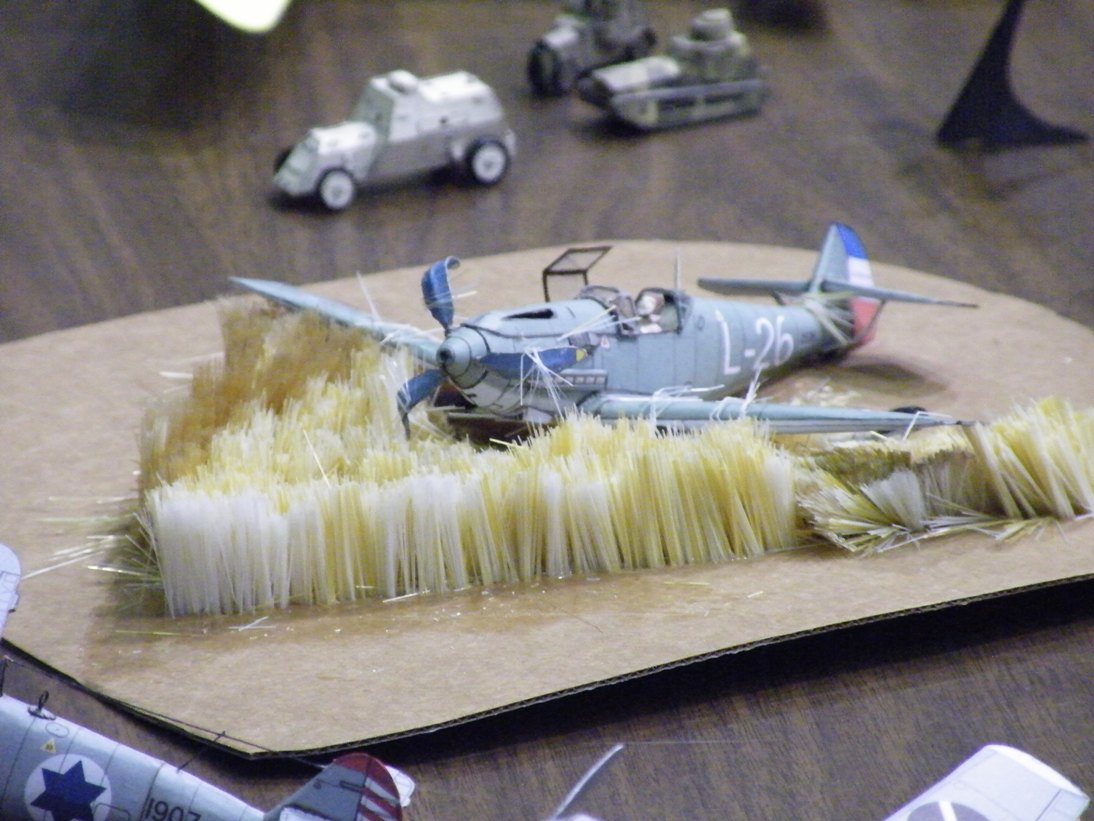 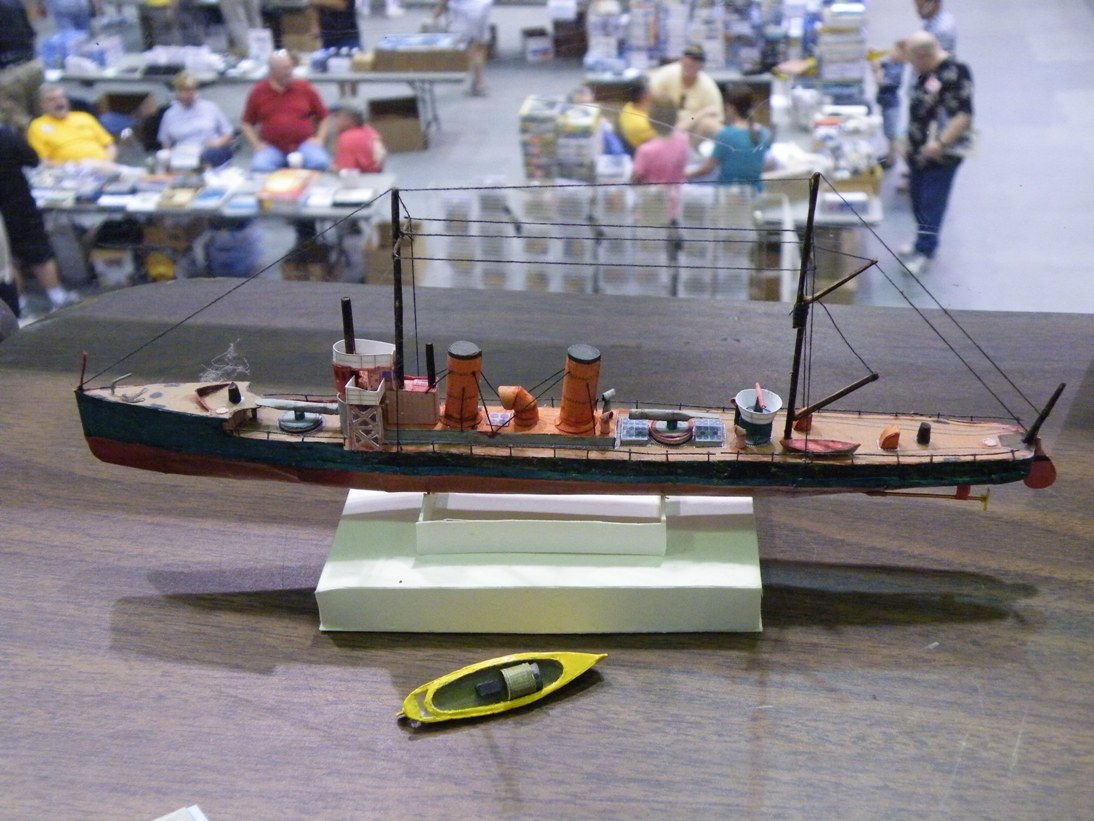 The raffle table had a good selection of kits.  The artist Sam Lyons donated his entire kit collection to the raffle.  Jerry Hall, Bill Paul and Tod Hickman all won kits from his collection.  Jerry also scored big by winning a paint rack complete with paints from the Badger Airbrush representative. The rep was there demonstrating his wares but had to leave in a hurry due to airline issues. To keep from having to transport the paint rack, he donated it to the raffle. Lucky Jerry! 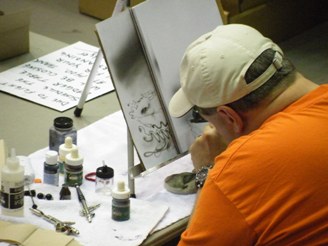 For lunch, some of us went to the Marietta Diner and some went to Williams Bros. BBQ.  After hearing Jerry's story about the "show" he received at the Diner (I'll let him tell ya 'bout that), I almost wish I'd gone there.  Anyway, we all had a good time and the show wrapped up between 5:00 and 5:30 PM.  Fortunately, the traffic gods were cooperative and we had a nice drive home.  We really enjoyed the show and are looking forward to it next year.